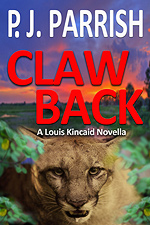 He hadn't been inside in a long time.

It was as dark as he remembered, and it smelled as bad. The place also still had that weird vibe in the air, like the testosterone that bubbled up from the balls and brewed in the reptile parts of the brain was being secreting through hundreds of sweat glands and was pinging around the room like cosmic rays.

O'Sullivan's was a cop bar. Located a block from the Fort Myers police station, it had the air of a married guy's den. Stale smoky air, cigarette burns on the tables, rows of trophies, a floor of crushed peanut shells and a big-screen TV permanently tuned to ESPN.

Like all primitive habitats, it had a pecking order. City detectives had staked out the back of the bar; county detectives, out of legendary necessity, owned the tables by the men's room so they could piss and moan more conveniently; the round tables in the middle belonged to the rank and file uniforms.

And in the back, by the juke box, sat Lance Mobley. Arms spread across back of the booth, perched under a glittering Happy Birthday banner, he looked like a king in a red leather throne.

Louis Kincaid waited until his eyes adjusted before he started back. He needed to see everything clearly right now because this wasn't going to be easy.

When he stopped at the table, Mobley was talking over his shoulder to a pretty lady in a blue halter top. No one was sitting in the booth with the sheriff, but the table was littered with empty bottles, heaping ashtrays and crumpled wrapping paper. Louis scanned the gifts while he waited for Mobley to finish flirting. A bottle of Leopold's Gin with a tag that read: Gin makes you sin. Three cans of John Freida's hair mousse ducted-taped together. A bundle of Cuban cigars. And a twelve-pack of animal print condoms.

Louis had known Mobley a few years now. Knew he was a publicity hound, a hard-ass leader, an office iron-pumper, a ladies' man, a closeted lounge pianist. But probably most important, he was a competent sheriff who used his charm and good looks to mask his lack of good judgment and investigative skills.

Louis glanced around the bar. Half the Lee County cops—and more than handful of city cops—were here. No matter what Mobley was, his men liked him. And that was important.

Louis slid into the booth. Mobley grabbed a bottle of Jack Daniels and poured himself another shot.

"You want a drink?" Mobley asked.

Mobley tried to signal the bartender, but when he was ignored, he searched the cluttered table for an empty glass. He found a used shot glass beneath a crumple of gold paper and filled it for Louis.

Louis let it sit in front of him.

"So what did you want to talk to me about that was so important you're interrupting my birthday party?"

"You told me to meet you here," Louis said. "You never said you'd be at a party."

Louis drew a breath, glanced down at the whiskey and decided to drink it. His throat was still burning when he spoke.

Mobley's brow shot up and his eyes took a moment to focus. The bar was nosier than hell but suddenly, it seemed that there was no one here but the two of them.

"I want back inside," Louis said. "I want to wear a badge again."

Mobley continued to stare at him, but as understanding sank in, his lips tipped up in a small smile.

"And I didn't think this day could get any better," he said.

Suddenly someone slapped Mobley on the back of the head, mumbled something about the sheriff getting lucky tonight and wandered away. Mobley paid him no attention, his gaze still on Louis.

"You're too old," Mobley said.

"You're too controversial, too well known as a PI," Mobley said. "I don't need any deputies who get their names in the papers."

"You mean deputies who get their names in the papers more than you do."

"See, that attitude is exactly what I'm talking about," Mobley said. "You've been rogue too long. You've forgotten what it's all about, lost respect for things like protocol and even fucking rank."

Louis leaned over the table. "Listen to me," he said. "I graduated pre-law from Michigan. I trained in one of the best police academies in the country and graduated third in my class. I've been shot at, stabbed and nearly hanged and have worked with some of the best investigators in this state and up in Michigan on half a dozen cold cases. With all due respect, you have no idea what kind of cop I was or what kind I will be. Sir."

Mobley's dimmed expression never changed. For a few moments, the bar was a cacophony of noises—clinking glasses, deep throated laughter and the pounding music of Guns and Roses's "Welcome to the Jungle."

"No," Mobley said, turning back to his drink. "Go ask Chief Horton for a job. He seems to like you."

"The city is on a hiring freeze," Louis said. "You're not. I saw the notice two days in the newspaper."

Louis sat back, staring at the empty shot glass in front of him. He hadn't wanted to make the argument he about to make—it seemed desperate and self-serving to use his race to pry an opening in the tightly shut door. But truth was, his brown skin was exactly what Mobley needed right now.

"I also read something else in the newspaper this week," Louis said. "Your department is facing seventeen counts of employment discrimination. I hear the justice department is coming down to review your hiring and promotional files."

Mobley shoved his glass aside and leaned into Louis. "Those charges are bullshit. I don't have a bigoted bone in my body. Everyone knows that."

"I guess you can tell that to the DOJ when they get here," Louis said "And trust me, once they get ahold of you they never let go."

Mobley was quiet, grinding his jaw.

"Did you know," Louis continued, "that there are some police departments in the south that are still under DOJ hiring quotas from the 1960s?"

"You've managed to sink lower than I thought possible," Mobley said. "Threatening me with discrimination. Get out of my bar."

Louis didn't move, instead ordering two beers to give Mobley time to simmer down. When the sheriff had taken a long pull from his bottle, Louis went on.

"Listen, sheriff," he said. "I don't like affirmative action either, though I know that even now there are some companies that still need it forced down their throats. But I never took advantage. I didn't even put my race down on my college application."

"My point is, you need some brown faces in your department and you've got one right in front of you asking you for a job."

Mobley shook his head. "You don't get it, Kincaid," he said. "We've gone out of our way to find qualified minorities. I'm not stupid. I know I can't police a Hispanic community with nothing but white men, but I'm telling you the quality of human being I need just isn't out there."

"Maybe you haven't looked in the right places."

"I have a damn good recruitment division," Mobley said. "And we're going to solve this so-called race problem. I don't need you and all the dead bodies you seem attract."

Louis looked away, hand around the still full beer bottle. He knew Mobley wouldn't make it easy, he knew he'd have to grovel some, but he had thought he could talk him into it. Though he had still had his detractors, his reputation as a PI in southwest Florida was a damn impressive one and he knew he might be able to take that to a place like Miami or Orlando. But damn it, he wanted to stay here, in Fort Myers, on Captiva, in his little gray cottage. Near the water. Near the handful of people who he had let into his life.

"Tell them I'm in the shitter."

"It's Undersheriff Portman. Better take it."

Mobley mumbled something and looked to Louis as he started a long slide out of the curved booth. "I got to take that call," he said. "Don't be here where I get back."

Louis watched Mobley stagger toward the bar where he leaned on his elbows and picked up the phone. Louis drew a breath and put a five on the table.

Half-way to the door, he stopped and took another look around O'Sullivan's. It was one level above a dive with its sputtering neon, chimney-thick smoke and cracked leather booths. He had never found a place like this when he was wearing a badge. In Ann Arbor, flush with a criminology degree and a rookie's idealism, he had decided he was too smart, too good to be part of the gritty off-duty lifestyle of a cop. And in Mississippi, the only tavern in town was decorated with a confederate flag.

He turned and walked to the door. Outside, the August air was still and scorched-smelling, baking the buildings and sidewalk like they were rocks in a kiln.

Louis turned to see Mobley standing in the dark doorway of the bar. His hair was the color of hay, his skin as bronzed as a lifeguard. A cigarette hung limply from the side of his mouth.

"You really serious about wearing a uniform again?" Mobley asked.

Mobley tried to take the cigarette from his mouth but the paper stuck to his dry lip and he had to peel it off. It took him a moment to refocus on Louis.

"I got this situation going on I'm going to deputize you for."

"Deputize me?" Louis asked. "Is that even still legal?"

"Yeah, kind of," Mobley said. "Anyway, doesn't really matter. I can do what I want."

"You'll get a temporary badge and ID card," Mobley said, "but no uniform. You'll wear street clothes. Jacket and tie."

In ninety-nine degree heat. Mobley was screwing with him but that was okay. He had a jacket. Somewhere. In his truck maybe, from that last case he had worked over in Palm Beach.

"So, consider this a test, Kincaid," Mobley said. "You pass it—and only I decide if you do—and I'll get you in front of my hiring board with a five-star recommendation."

"I'll get you your credentials tomorrow, but you can start right now."

Louis squinted up at the sun. It was already three. He looked back at Mobley.